By a strange flight of fancy, certain children’s picture books are categorized in my no-longer-so-local library by something other than the author’s last name.

Beauty and the Beast tales fall into that category.

Which means I read two renditions of Beauty and the Beast while reading the BEAs (instead of the BREs or the EILs, based on who was retelling the classic tale.)

I didn’t mind in the least.

Sometimes it’s nice to see a couple different retellings of a story side-by-side.

In Jan Brett’s retelling (also illustrated by herself), Beauty is waited on by a collection of exotic animals in the Beast’s house–monkeys, peacocks, and the more tame dogs. The Beast has a man’s legs and a boar’s upper body. He only appears at dinner, where he engages Beauty in thoughtful conversation before closing the evening with a question: “Beauty, will you marry me?” 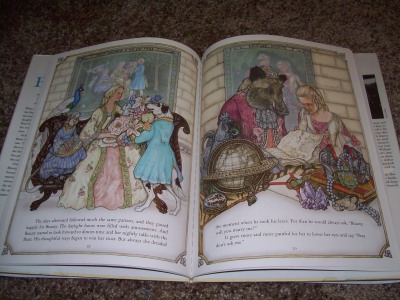 Brett’s illustrations are a delightful treat, especially since they foreshadow the exciting denouement. We see statues and friezes of the prince’s former life in the garden as the merchant contends with the furious beast. Once Beauty is ensconced within the castle, scene after scene includes decorative tapestries which display the scene playing out in “real time”–except with the animals as the people they once were and will again become. Often, these tapestries include little messages–“Do not trust to appearance” or “Courage, Beauty-Your Happiness is not far away.”

For one thing, both the writing and the illustrations draw to mind the Victorian age, with delicious gowns for the girls and tails and top hats for the men. 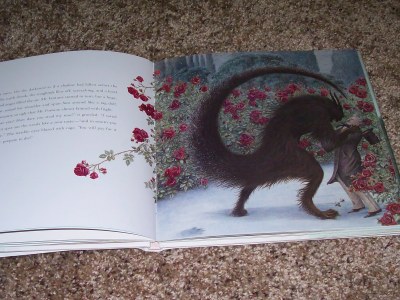 For another, unlike in Brett’s retelling, where the characters retain their types, being merely “Beauty” or “the merchant” or “the Beast” or “Beauty’s sisters”, Eilenberg’s retelling gives each character character beyond type. The merchant becomes “Ernest Jeremiah Augustus Fortune, Esquire, Merchant”. The sisters become “Gertrude” and “Hermione”, who are crazy about jewels and fashion respectively. Beauty and the Beast, on the other hand, maintain their typical names–although they’re given some roundness of character.

Beauty becomes a romantic, a dreamer who longs to marry for love–and who thinks nothing would be better than to marry a prince for love. Nevertheless, she keeps her romantic dreams to herself, choosing to seek her family’s best rather than her own. When her father’s fortunes appear to have taken a turn for the better and Mr. Fortune asks his daughters what they’d like him to bring back for them from his trip to the sea to recover his lost ship, Beauty wants to ask for a Prince–her true heart’s desire. But since she knows it isn’t within her father’s power to bring her back such a thing, she asks instead for something she believes will cost him little–just a rose.

Of course, she doesn’t know how costly the rose will be to her father–and to herself. And she doesn’t know that, in asking for the rose, she will be acquiring for herself a prince. But such is the charm of this story. For in being selfless, Beauty indeed obtained her heart’s desire.

The Beast, too, takes on a human quality. He is terrible in his hairy, fanged, and clawed beastliness; but even more so in his fury at what has become of him.

“Do not call me ‘lord’!” roared the creature. “Do not try to flatter me with pretty words. I do not like it. We should say what we mean and be what we are. I am a beast. My name is Beast. You will call me Beast. Beast by nature, Beast by name. Beast! Beast! Beast!.”

He is terrible and beautiful when he acquiesces to Beauty’s request that he no longer ask her to marry him again.

The Beast was silent for a time, his head bowed. “I would not hurt you for any price,” he said at last. “Forgive me.” He raised his eyes to Beauty, and for a moment she feared that she had wounded him beyond repair, so broken and hopeless did he seem. But then he seemed to find courage and somehow she knew what he would say even before he spoke. “I will not ask you again–I promise…I ask only one thing: if you are happy to be my friend, please promise that you will never leave me alone.”

And he is just plain beautiful once Beauty’s love has turned him into a prince again.

“Now you see me as I really am,” he said. “Your love has saved me from a terrible spell. I was turned into a beast, and only a heart who loved me for my self could set me free.”

I enjoyed this retelling immensely–partly for the beauty of the retelling, partly for the loveliness of the illustrations, and partly for my own identification with Beauty’s dreams and with the Beast’s dreadful pain.

I highly recommend either tale.