If you’re a student of psychology (or a student in any field that applies the behavioral sciences), you’ve likely heard of Maslow’s Hierarchy of Needs. Maslow suggested that humans have a collection of fundamental needs, and that these needs are “hierarchical”. That is to say, some needs must be met in order to go on to seek after the “higher” needs.

As per the diagram below, Maslow suggests that physical needs are the base, followed by the need for safety, and then for love/belonging, and then for esteem. At the pinnacle, Maslow has placed “self-actualization”–a vague term for a number of feel-goods ultimately summed up in “reaching one’s potential”. 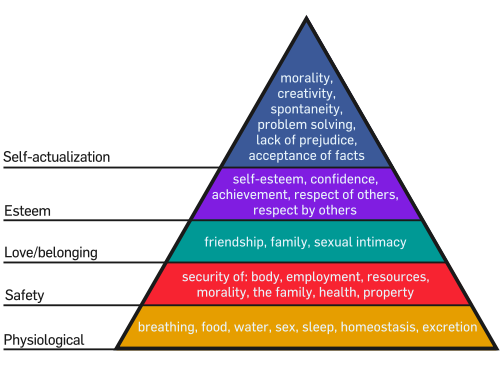 Image from the Wikimedia Commons, licensed under a CC 3.0 license

Maslow’s theory has been critiqued for its insistence that the “lower” needs be met before the higher needs are sought. Experience teaches us that even a hungry child still seeks love and acceptance (to fulfill a “higher” need). Additionally, while Maslow’s hierarchy may have utility in explaining Western patterns of behavior, it breaks down when applied to Eastern cultures where community is regarded more highly than individuality.

I don’t really care to discuss Maslow’s hierarchy–I’d much rather propose my own.

Enter Menter’s Hierarchy of Needs Induced by the Fall of Mankind:

When Adam and Eve were tempted by the serpent, their first step towards sin was to turn their eyes from God to self.

“…the woman saw that the tree was good for food, that it was pleasant to the eyes, and a tree desirable to make one wise…”
~Genesis 3:6a

Having turned their eyes from God, they chose to obey the tempter rather than God.

“…she took of its fruit and ate. She also gave to her husband with her, and he ate.”
~Genesis 3:6b

And once they ate, they experienced the consequences of sin.

“Then the eyes of both of them were opened, and they knew that they were naked…”
~Genesis 3:7

The fall induced three vital needs in the spirit and soul of every man.

I propose that, at least for most people, the awareness of each of these needs follows the reverse progression.

First, man becomes aware of the consequences of sin–and seeks to escape them. He experiences guilt or shame. He sees broken relationships, physical and emotional suffering. He fears death. And he needs a Savior to free him from these consequences.

He receives Jesus as Savior. “Free me from hell,” he cries.

Get-out-of-hell-free card safely in hand, he discovers his second great need. He becomes aware of his bondage to sin. He wants to do what is right, but he finds himself unable to do so. Even recognizing that he IS freed from sin through Jesus Christ, he still finds himself inclined towards sin. He needs a new master.

He receives Jesus as Lord. “I will submit my life to Your mastery,” he affirms.

Watching his steps carefully, anxious to be obedient to his new master, the man discovers his final need. He is discontent with this. Somehow, this falls short. Is this all there is? he wonders. He might even wonder if it’s worth it. What has he gained by submitting to Christ’s mastery? He needs a new treasure.

And at some point, by the grace of God, he receives Jesus as Treasure. “You are worth everything,” he proclaims.

There, as he is lost in the greatness of the Treasure, his needs disappear. Christ has met them, He has fulfilled them. For really, all of our needs are simply metaphors for our truest need–God Himself.

(This is a reflection on John Piper’s concept of receiving Christ as Treasure, as articulated in the second chapter of Desiring God. For more reflections on Desiring God, see my notes here.)

I wrote a half-dozen “Love Month” posts before I figured out in my head how exactly I wanted to lay out this whole “Love Month” deal.

And I’m sure some of you are thinking “What the–”

It’s not the standard way to begin a discussion of love and dating and “relationships”.

But I am convinced that it’s the only way to do love, dating, and relationships right. We can’t understand love unless we know the love of God (“By this we know love, because He laid down His life for us. And we also ought to lay down our lives for the brethren.” I John 3:16) We can’t find a mate without the express favor of the Lord (“He who finds a wife finds a good thing, And obtains favor from the LORD.” Proverbs 18:22) And we certainly can’t figure out how to be married properly without knowing Christ’s love for His bride (“Husbands, love your wives, just as Christ also loved the church and gave Himself for her…” Ephesians 5:25)

I’ve begun the discussion of relationships with a discussion of the most important love relationship in ANY person’s life, whether single, married, or (as my mom put it in a comment a few days back) “somewhere in between”. Unless we are actively participating in THAT relationship, all of our other (human) relationships are merely play-acting, like little girls dressing up in high heels and pretending to be married, haranguing their imaginary husbands on the phone.

Beginning tomorrow, we’re going to shift gears a bit–but I don’t want us to shift focus. All of what we speak about in the upcoming month–in fact, all that we speak about for the rest of our lives–should be placed into perspective by placing it into the context of Christ and His great love for us.

The Bible makes it plain that all of us were born into slavery to sin.

“All we like sheep have gone astray;
We have turned, every one, to his own way;”
Isaiah 53:6

As slaves to sin, we deserved only death.

We were cut off from relationship with God.

“But your iniquities have separated you from your God.”
Isaiah 59:2

In fact, we were practicing open rebellion against God.

“Because the carnal mind is enmity against God; for it is not subject to the law of God, nor indeed can be.”
Romans 8:7

Yet God loved us nonetheless and pursued a love relationship with us. He pursued us even to the point of laying down His life for us, dying in our place.

“But God demonstrates His own love toward us, in that while we were still sinners, Christ died for us.”
Romans 5:8

Will you accept His proposal?

Maybe you’ve already believed in Jesus Christ for salvation, but that’s as far as you’ve gone. You’ve seen salvation as “fire insurance”, but haven’t truly entered into a love relationship with Christ. He still desires that relationship–He paid the price for that relationship.

Will you accept His proposal?

I urge you to spend some time with God, tell Him that you accept His proposal. Enter into that relationship.

That relationship will change your life.

It has certainly changed mine.