I feel like I’ve slid comfortably back into my reading groove this month, probably because I’ve given myself permission to ignore the internet and cleaning. So, my house may be filthy and my Google Reader rather stuffed–but my Nightstand is still moving! 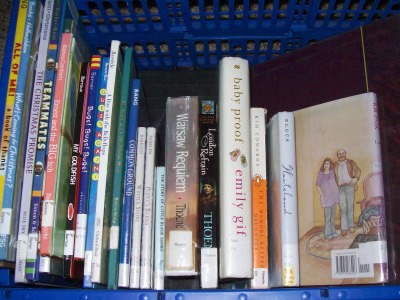 This month, I made it through:

Anastasia Krupnik by Lois Lowry
Picked up while trolling the library for unfamiliar children’s fiction. Not sure exactly what I think of it. I wonder if Anastasia Krupnik, published in 1979, was the origin of brat literature for youngsters? It’s definitely not the “good kids get into scrapes because they forget/ignore the rules/common-sense while chasing a mystery” of the era prior (Think Boxcar children, Trixie Belden, etc.) Anastasia’s parents, a poet and an artist, are indulgently negligent; Anastasia is an only child, a precocious soul, and a brat. Hmmph.

Baby Proof by Emily Giffin
Chick lit of a different sort. She’s got the guy. Finally found someone who agrees with her about not wanting kids. And then he decides he might just want a little one. And she divorces him. She is NOT going to have kids. Decentish on the chick-lit level, a step above Bridget Jones and Shopaholic, but still far from meaningful.

Bright-sided : how the relentless promotion of positive thinking has undermined America by Barbara Ehrenreich
Possibly the first book to ever merit zero stars in my highly subjective rating system. It could have been a good book, if Ehrenreich had kept her socio-political agenda out of it. But I think that’s one hope that I’ve just got to let die. She can’t do it.

Composting by Liz Ball
Yes. I read about composting. I compost in my backyard. I used to have composting worms under my sink. And I catch the humor in discussing a “hot pile” just a little too late to keep me from seriously explaining how the ratio of carbon to nitrogen effects the heat of said piles. I’m glad the Bible study gals (and John) are willing to accept me, quirks and all!

The Memory Keeper’s Daughter by Kim Edwards
You know those books that just suck you in and demand that you keep reading until all hours of the morning? The Memory Keeper’s Daughter is one of those. It’s all about how one choice changed a whole family, rippled out to affect whole communities. It’s a terrific story. This book originally went on my TBR list based on Colloquium’s review.

Warsaw Requiem and London Refrain by Bodie Thoene
My love affair with these books continues. It’s probably a good thing that I’ve forced some balance into my reading diet by giving myself a rubric for checking things out. Otherwise, I’m pretty sure I’d be reading these and only these until I’m through to the end!

Wasteland by Francesca Lia Block
Easily the weirdest book I’ve ever read. Written in first person stream of consciousness from three different characters perspective, this novel explores a brother and sister who struggle against a growing attraction for one another before, finally, the brother commits suicide. The plot is weird, the writing style is weird, the imagery within is weird. It’s just a weird book. Billed as YA, this is nothing I’ll be recommending to any of my “young adult” (read “teenage”) friends.

18 (at least) Children’s Picture Books author name BA-BASE
Unlike Carrie’s reading challenge, where she skips any books that aren’t at the library when she and her family goes, my challenge means I have to actually read EVERY book in my no-longer-local branch. So I’ve been playing catch up, filling in those missing books I didn’t read during my first pass. 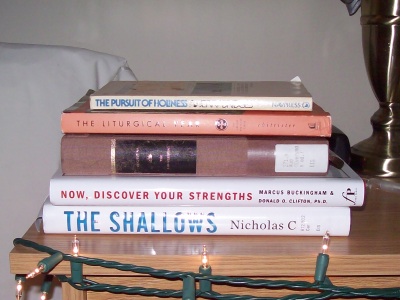 With four weeks left on this last trip’s library haul, I’ve got a stack I’m in the middle of…

And a stack in the wings for when I’m done with those! 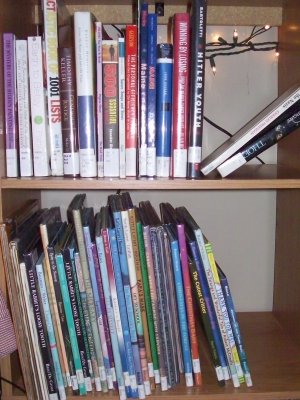