Prompt #11: “How old were you when your brothers and sisters were born? Do you remember the first time you saw them?”

I was one and a half when Joshua was born. I don’t remember a thing. (This picture, by the way, is not of our first meeting. Those photos were lost in oblivion due to no film being in the camera, maybe?)

I was almost four when Daniel was born. I remember staying at Grandma and Grandpa’s house and screaming almost inconsolably that “I NEED my DADDY!” It was almost inconsolably because Grandpa did manage to eventually bribe me into quiet with a butterscotch disk. (And he wouldn’t let me have the butterscotch disk until I was completely done crying–and done with the weird hiccuppy breathing thing kids have after a really heavy cry.) I don’t remember meeting Daniel (although, as you can see from the photo below, I was plenty intrigued by the meeting in real time).

no images were found

I was five when John was born and it all happened so fast I don’t remember anything. I do remember changing John’s diaper though (when he was a toddler). (BTWs, congrats to John and Kaytee, who are getting married today. John was the first to make the boys outnumber the girls three to two; today he reverses it and makes the girls outnumber boys five to four.) 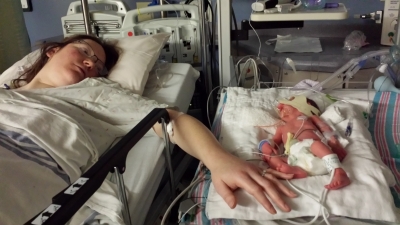 I had just turned seven when Timothy was born. Mom and Dad were doing their first home-birth officially alone (that is, the first one where they never intended to have a midwife present–Dad had already delivered a couple of precipitous deliveries sans midwife, and had assisted the midwife with another couple. He was an old pro by the time Timothy rolled around.)

The excitement of having a new baby being born made it very difficult for Anna and I to sleep the evening of the eighteenth, so we whispered under our covers until we’d developed a plan. We sneaked out of our bedroom, peaked around the hallway into the living room, and witnessed history in action.

Err. I’m not sure what Anna saw, but what I saw was rather unremarkable. The only memory that remains is of a big metal bowl sitting on the floor (perhaps for the afterbirth?) And I remember the paper bag of receiving blankets in the oven–although that memory would have been from the preparations for labor, not the actual event that I tried so hard to observe.

Of course, Anna and I were a bit skittish. We were fully aware that this was not something that we were supposed to be watching. So, at the slightest sound, we’d scurry back into our room, only to peek back out a while later.

At last, Yvonne, the friend who was assisting Dad with delivery came to shush our whispers. I remember her threatening to give us medicine if we didn’t go to sleep–something that I’d never heard of before in my entire life.

I guess we must have gone to sleep–or maybe we didn’t. But Timothy was born that night and it didn’t really matter any more. He was there. (And isn’t this the sweetest little picture of John kissing Tim’s forehead?) 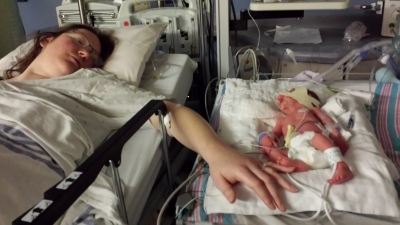 I was nine years and one week old when Grace was born. Compared to the rest of our births, Grace’s was exciting. She was going to be born in the hospital–and we might not be able to see her immediately if we didn’t scab over from our case of the chickenpox at least a week before she was born. And if she was born too late, she might miss Easter and not be able to wear the Easter dress Mom had made to match mine and Anna’s. And if she wasn’t a girl? (Mom and Dad never chose to “find out” any of our sexes.)

We scabbed over on my ninth birthday, exactly seven days and a few hours before Grace was born.

Mom went to the hospital. We stayed at home with Yvonne. We waited impatiently. We went to sleep.

Yvonne woke Anna and I up a little after three in the morning.

After four little brothers, we had a baby sister!

The boys found out in the morning.

Then began the second long wait–waiting until the (stupid, in our eyes, at least) hospital would release our Mom and our sister so that we could see her. After John and Timothy’s births (during which the others of us kids were either home or at a close neighbor’s house), we were used to instant sibling-seeing-satisfaction.

They had to do tests on Grace. We filled the time by gathering together all the neighbor kids to make a welcome home banner, which we proudly displayed when Grace finally got to come home a whole 12 hours after she was born. (Gosh, but those hospitals take forever.)

It was the bustin’ proudest moment of my life, when my little sister came home. 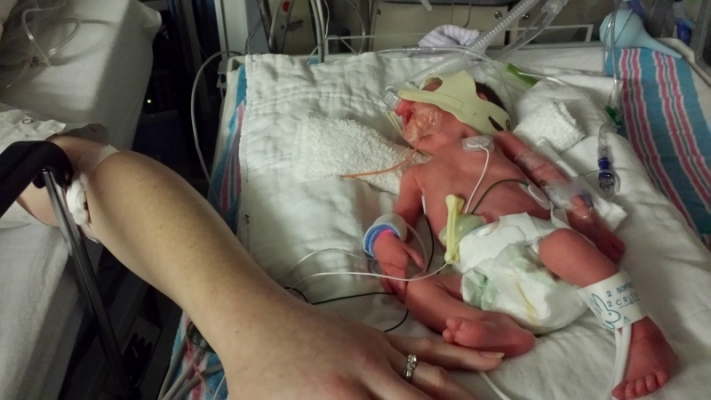 Grace Joy. ‘Cause after six kids, you need Grace for the seventh–and she was a Joy from day one.

3 thoughts on “Flashback: When you were born”