This is the next installment in a rather long series about how Daniel and I met–and have become engaged. Click on the “Our Story” tag for context.

We spent the next morning with Dave and Katie and their kids.

Well, mostly with their kids.

Daniel’s nephew took Daniel’s lap and his oldest niece (who had gotten over her shyness of me) took mine. E read to Daniel from his books–and P, not to be outdone, went to find some books of her own. P and I “read” her counting books a half a dozen times, counting up from one to twelve and back down again.

E moved on to a movie, his one allowed that week–but P still wanted to play. This time, she wanted both Uncle Daniel and his friend Rebekah to play with her. She handed us each a number of magnets and instructed us to place the magnets, one at a time on a magnetic board.

Daniel and I shared bemused glances as P directed the game of her own making.

Eventually, P tired of her play and moved on to other things–taking pictures with her Mom’s cell phone. She got plenty of shots of the room at large, but eventually her attention turned to the two still sitting on the couch. 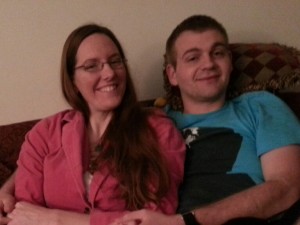 At length, we left for lunch. Daniel would take me from there to the airport.

As I transferred my luggage from my car to Daniel’s and rearranged this item and that inside my bags, Daniel asked if I had room for this.

This was his brand new tablet-a Galaxy Nexus 7.

“Because I want to Skype with you while you’re away,” he explained. “You can give it back to me next week when I come up to Columbus.”

I tucked it into my purse, a little embarrassed at the gesture (and a little unsure of what flying with not one, not two, not three but FOUR electronic devices would be like–I had both my cell phone, my Kindle, and my work laptop with me, in addition to the tablet.)

We went to lunch, and then to the airport. Daniel carried my luggage and waved goodbye.

And then I was off to Philadelphia.