While I enjoy complicated techniques and fancy ingredients on the occasion, I generally have three priorities in cooking. I like my recipes cheap, quick, and tasty.

Which is why I’ve been selecting cookbooks from the “quick” section at my local library.

Rachael Ray features prominently in this section, and I chose Classic Rachael Ray 30-Minute Meals for my first foray into the world of Ray. 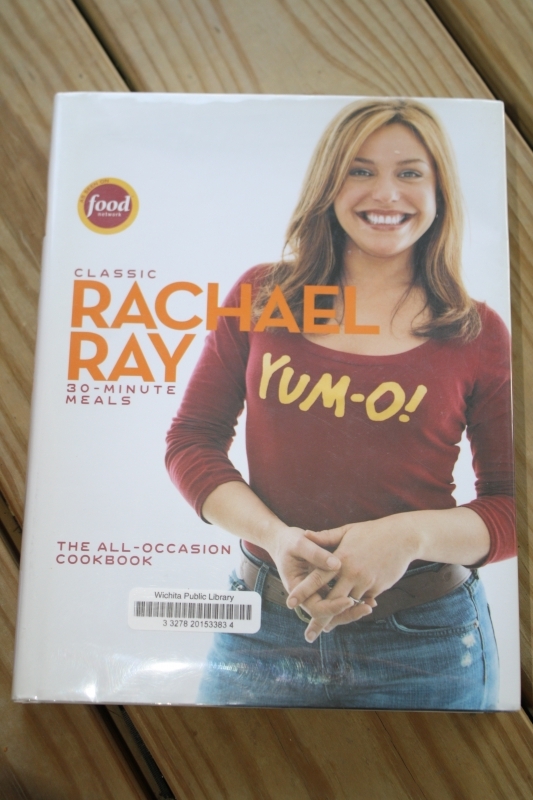 With 500 or so recipes, this book doesn’t skimp like some do. The recipes are divided into 4 broad categories: Everyday, Parties, Date Nights, and Kid Chefs. Each recipe contains a side-bar “menu” that includes the entree and suggested sides (recipes for sides may or may not be included depending on their complexity: “Green salad and Crusty Bread” does not have a recipe.) Some recipes include a little blurb with recipe descriptions or personal stories, but not all recipes do.

I tagged quite a few recipes in the “everyday” section as interesting (most of the party recipes were a bit too fancy for me, see above) – and I tried three recipes altogether.

Our family loves curry, so I was eager to try Ray’s “Curry in a Hurry”, which used golden raisins and mango chutney for sweetness (rather than the coconut milk we often use in our curries). I tried it with green curry paste and added extra vegetables (green peppers and sweet potatoes if I remember correctly.) We found that it was INCREDIBLY mild and quite sweet. I suppose we shouldn’t have been terribly surprised – green curry paste is much milder than red curry paste, so we’ve often felt the need to add more green curry to recipes (especially those written for the generic American). Also, both sweet potatoes and bell peppers tend to be sweet vegetables, so… Even so, while the idea was interesting, the reality wasn’t even compelling enough for me to try modifying it for future use.

The second recipe we tried was “Mamma’s Broccolini and Ricotta Pasta”, which was very easy to put together, but lacked something in oomph. Perhaps it was because I used frozen brocccoli instead of broccolini (does broccolini have a stronger flavor?), but we ended up loading this with Parmesan cheese (not in the recipe at all) to give it a bit more flavor – and still found it pretty bland. Sad day.

The third recipe we tried was much more successful. “Chili for ‘Veg-Heads'” is a vegetarian chili recipe with three different types of beans (black, red kidney, and refried beans) as well as peppers and onions. I love me a vegetarian chili, but Daniel likes to have meat in his meals, so I added a pound of ground beef but otherwise made this as written. Daniel conceded that it was good enough to use as a base for developing our own recipe (hooray! I’ve tried a half dozen or so chili recipes over the course of our marriage, none of which merited such high praise – the most common complaint Daniel has had is that my veggie-loaded chilies are too sweet.) As written, the chili is VERY mild (do I sense a theme?) – so most of our modifications have involved adding heat by mixing up the pepper types and/or quantities. I’ve included our favorite rendition below.

From the recipes we tried, it appears that Ray really does deliver on the 30 minute promise. Even with cutting up vegetables, I was able to complete the recipes we tried in half an hour. So that’s good. As far as my other two priorities: cheap and tasty? Eh. Many of the recipes call for unusual ingredients, which are generally more expensive (both because they’re harder to find and because you’re more likely to have ingredients left over that you can’t figure out how to use.) As far as taste goes, the three recipes we tried all ended up on the bland side. Then again, we tend to like highly seasoned dishes – so your results may vary.

As far as health goes, I was not tremendously impressed with the suggested menus, which were starch-heavy and vegetable-poor. Skip one of her starches and add an extra vegetable side (or two) if you want a balanced meal. Also, Ray apparently has no idea what constitutes “healthy”, so just ignore anything she says about health (thankfully, she mostly avoids discussing it.)

How is this book for browsing? As mentioned above, some recipes have little blurbs, others don’t – which means you often have to read through a recipe in order to get a sense of what it’s like. You may or may not enjoy that. There are full-page photographs every 5-6 pages (or so, I didn’t actually count), and smaller photos more frequently than that – but a fair number of the photos are of Ray rather than the food, which I find HIGHLY disappointing.

Overall, I am not impressed with Rachael Ray (based solely on this cookbook – I don’t have any other knowledge of her or experience with her.) She fails at two of my primary criteria for recipes (cheap and tasty) – and provided a sub-par recipe reading experience. Again, your results may vary.