I read all the “My First Little House Books” I could get my hands on this February in celebration of Laura Ingalls Wilder’s 150th birthday and Barbara’s Laura Ingalls Wilder Reading Challenge. I was joined in this challenge by my two-year-old daughter Tirzah Mae, who ate up every word.

Based on Little House in the Big Woods:

Winter Days in the Big Woods, based on the chapters “Little House” and “Winter Days and Winter Nights”

This introduction to Little House in the Big Woods skips right past the messy business of butchering and jumps into the coziness of winter life in the little log house. Mary and Laura playing in the attic. Making “pictures” on the frosty windowpanes. Doing the proper work for each day. Dressing up paper dolls. And pa coming home and playing the fiddle and telling stories. This particular book condenses 44 pages of Laura’s writing into 35 sentences. I couldn’t tell whether I disliked that it skipped so many details or that it said just enough that I could draw up those missing details in my mind. For Tirzah Mae’s part, she adored this particular book, especially the sing-song list of each day’s tasks. 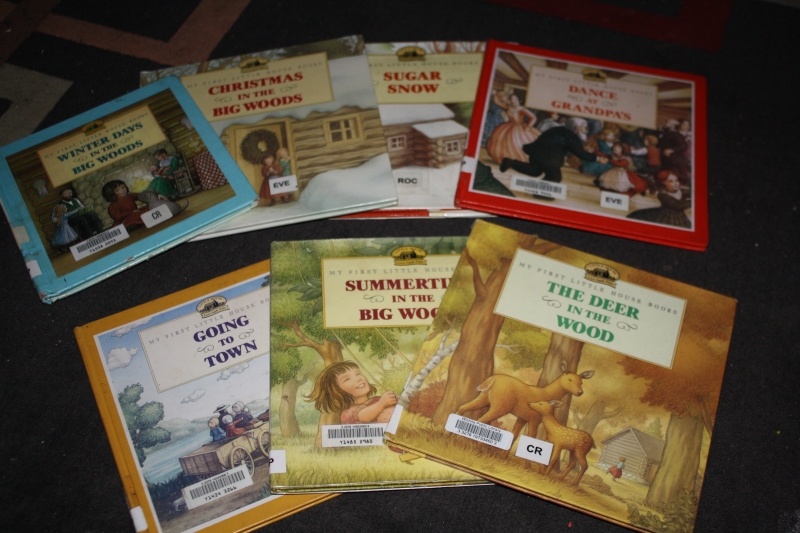 Christmas in the Big Woods, based on the chapter “Christmas”

I’ve always loved the Christmas stories from each of the Little House books, modeling my own planned “St. Nicholas Day” stockings after Laura and Mary’s (from Little House on the Prairie) with a candy cane, (chocolate) coins, a small toy, and something useful inside. Reading this, I am reminded of even simpler pleasures: pancake men. I plan to include this title in next year’s Christmas basket – and maybe we’ll make some pancake men of our own after reading it. 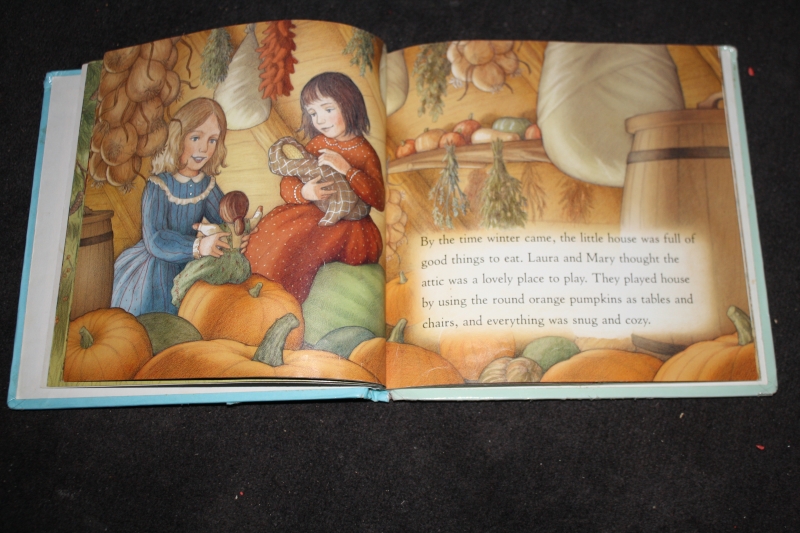 Sugar Snow, based on the chapter of the same name

While some of the “My First Little House Books” mention that Pa told stories, few share any of Pa’s stories (maybe because most of them are a little dark?). Sugar Snow is an exception. After Pa brings home some maple sugar for Mary and Laura, he takes them on his knee and tells them how Grandpa made the sugar. This particular story has a nice structure since it (mostly) begins and ends with a day – from Laura’s wakening to her going to sleep. 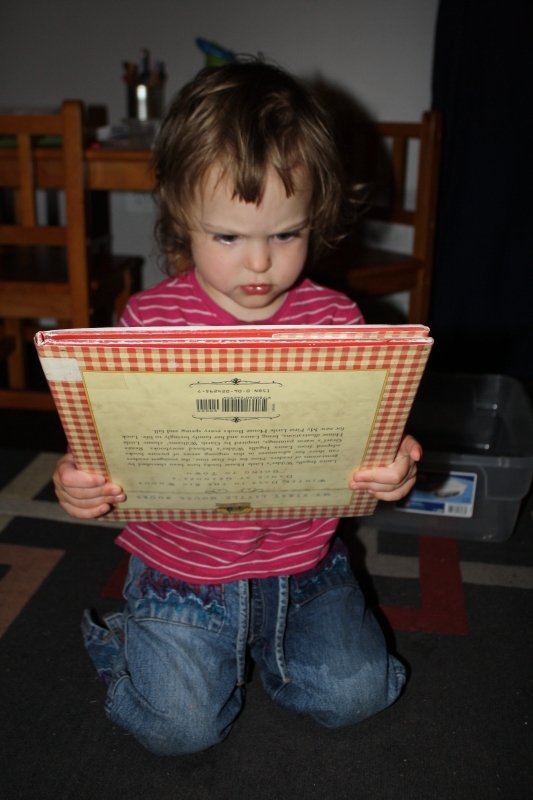 Dance at Grandpa’s, based on the chapter of the same name

Each book adapted from Little House in the Big Woods begins with the same words: “Once upon a time, a little girl named Laura lived in the Big Woods of Wisconsin in a little house made of logs. Laura lived in the little house with her Pa, her Ma, her big sister Mary, her little sister Carrie, and their good old bulldog Jack.” For the adult reader, this repeated introduction might get old (does get old), but toddlers like Tirzah Mae lap it up. This reminds her that this story is about the same family the last story was about. From there, the stories only introduce a limited additional cast of characters. So, in this particular tale, we learn about the dance at Grandpa’s without any mention to the aunts by name, without wild Uncle George, and without the other Laura. Also, since this is NOT the book about sugar snow, there is no mention of the maple sugar. Does this ruin Laura’s delightful narrative? I’ve puzzled it over multiple times and decided that, no, it does not. Instead, it gives a taste to entice a child into Laura’s world – and leaves enough detail unspoken to make exploring the whole thing desirable. 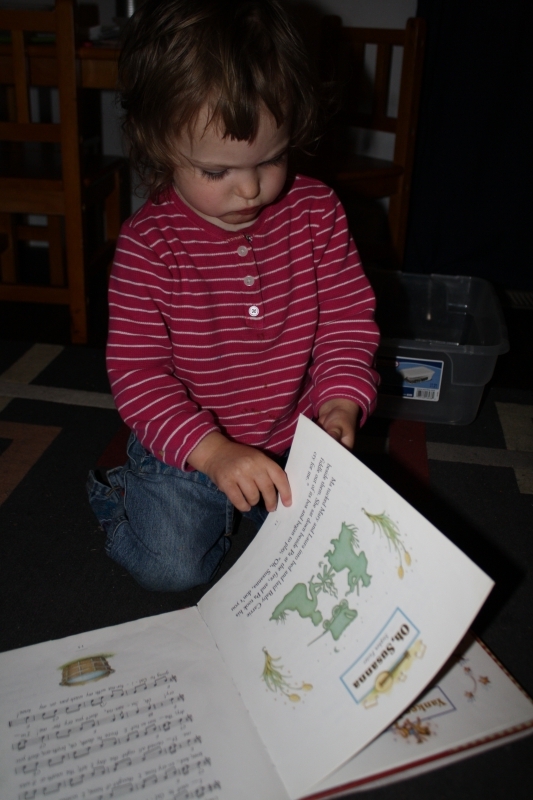 Tirzah Mae loved all these books based on Little House in the Big Woods, so much so that whenever I read one, she brought me another and another and another. After spending more than a half hour reading through these books, I thought maybe I had been premature in assuming Tirzah Mae couldn’t pay attention to the real thing. I brought up my copy of Little House in the Big Woods from the basement, and began reading it to her the next day. I learned that all those people who say it’s not a great first chapter book read-aloud are right. Even though Tirzah Mae has plenty of attention for prolonged reading of the picture book versions, the “real deal” simply moves too slowly for her toddler mind. Which is just fine. I enjoyed introducing her to the world of Little House using these books and look forward to exploring the “real deal” with her when she’s a little more mature.

We also read a more limited selection of picture books adapted from Little House on the Prairie and Farmer Boy. It seemed to me that Tirzah Mae wasn’t as interested in these, perhaps because she enjoyed the continuity of place so much from the many books based on Little House in the Big Woods. The other books we read were Going West, Prairie Day, A Little Prairie House, Winter on the Farm, A Farmer Boy Birthday, and County Fair. 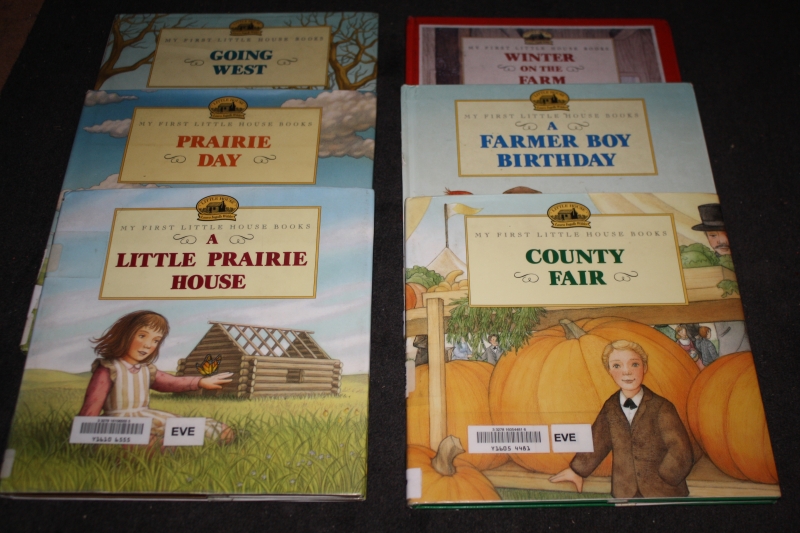 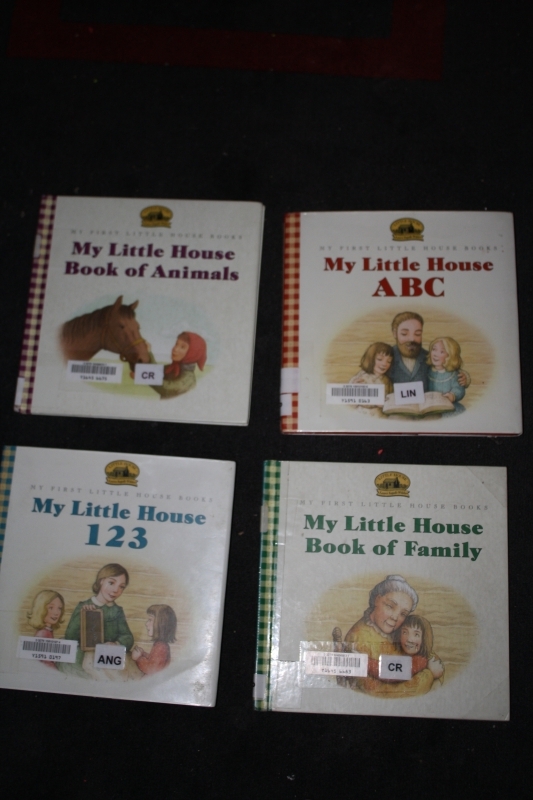 The one exception to our dislike of the topical titles was My Little House Songbook, which included several of the songs Laura mentions in her books. Tirzah Mae insisted that Papa and I read and re-read this book over and over (preferably skipping the text and going straight to the singing part.) :-) 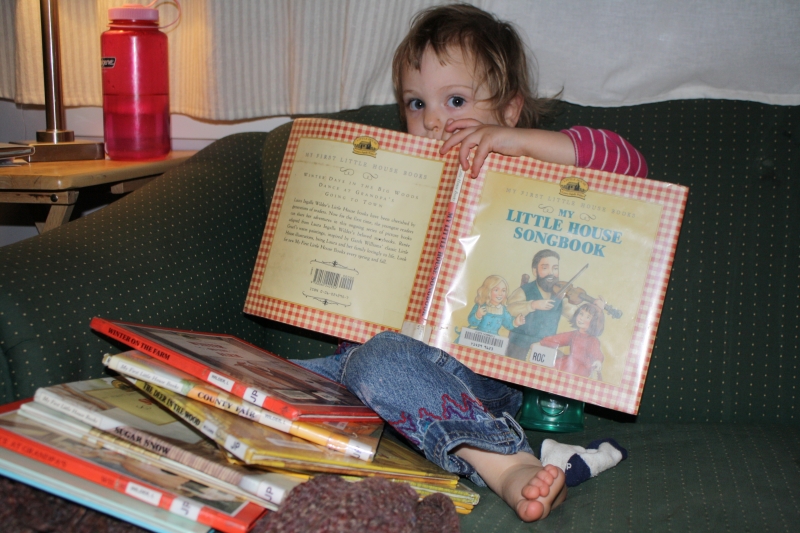 I am so glad that Tirzah Mae and I opted to explore the Little House books together this month. While these picture book abridgments can’t possibly measure up to the works they’re based on, they are delightful in their own right and I’m thrilled to be able to use them to introduce my daughter to one of my old friends a little earlier than I otherwise might have been able to. Don’t forget to run over to Barbara’s wrap up post to read about what others have read and done for this year’s Laura Ingalls Wilder Reading Challenge.