Once we’d geared up, we had a short wait. Then, it was time to get in the plane for our trip up. 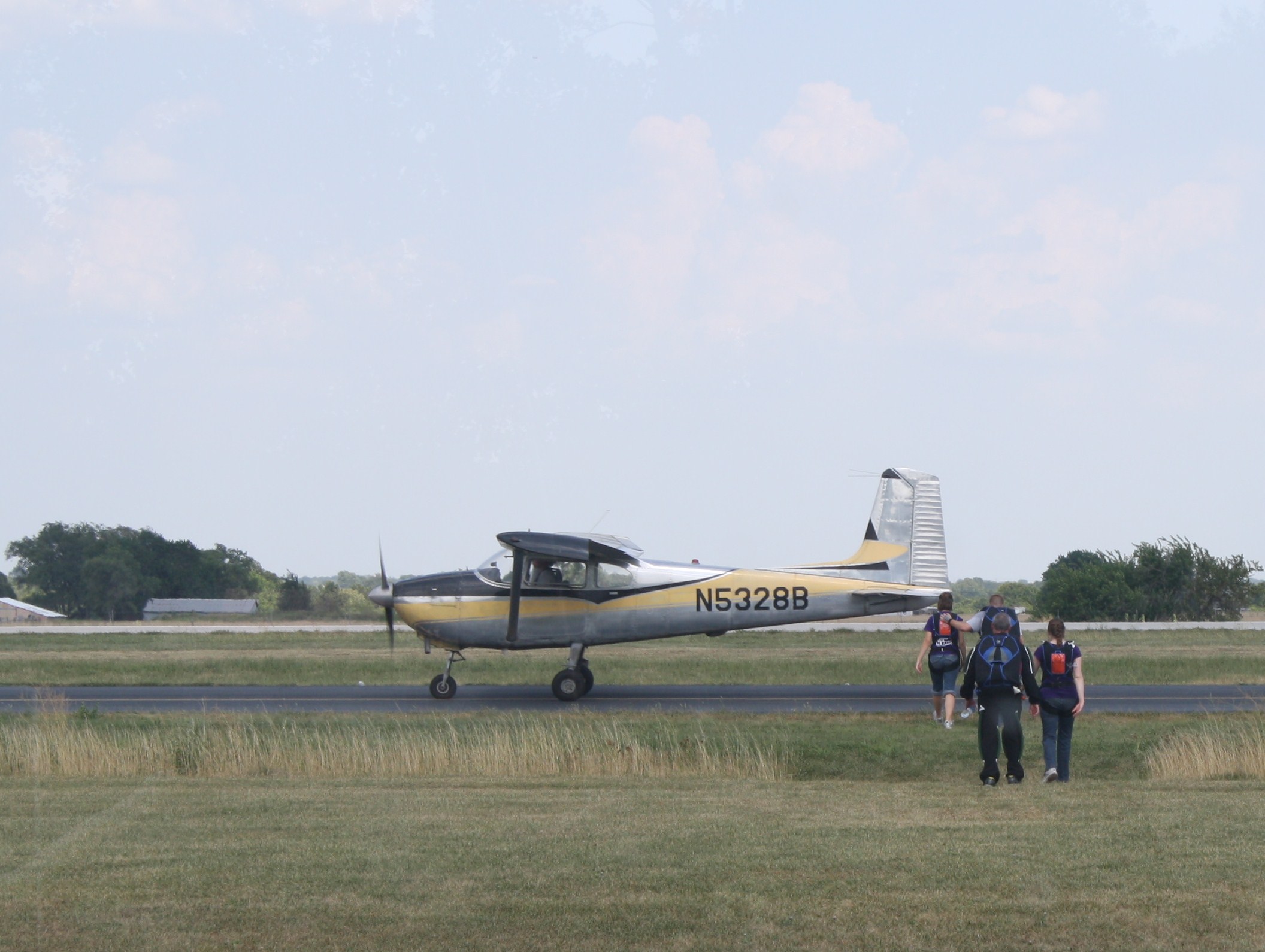 Joanna would jump second, we discovered as her instructor directed her towards the back-right corner of the little plane. Her instructor entered after her and took his seat on the floor facing her, back to the the pilot’s chair.

Then my instructor sat with his back against a box, bent knees parallel with the other instructor’s, but coming from the opposite direction. The two men draped their arms over their touching knees, settling in for what was for them a comfortable routine.

My post was alongside the pilot, back against the front of the plane, with instruments and our pilot’s lap to my right, the airplane’s door to my left, and my instructors knees directly in front of my own.

There weren’t many non-awkward places to look, not a lot to observe from my floor-bound vantage point. So I focused on my friend in the opposite corner, merely five feet away.

Joanna must have felt a bit awkward too, sitting face to face with the man she’d soon be strapped to. Or perhaps she was enjoying a Zen moment prior to a terrifying jump–at any rate, she closed her eyes. 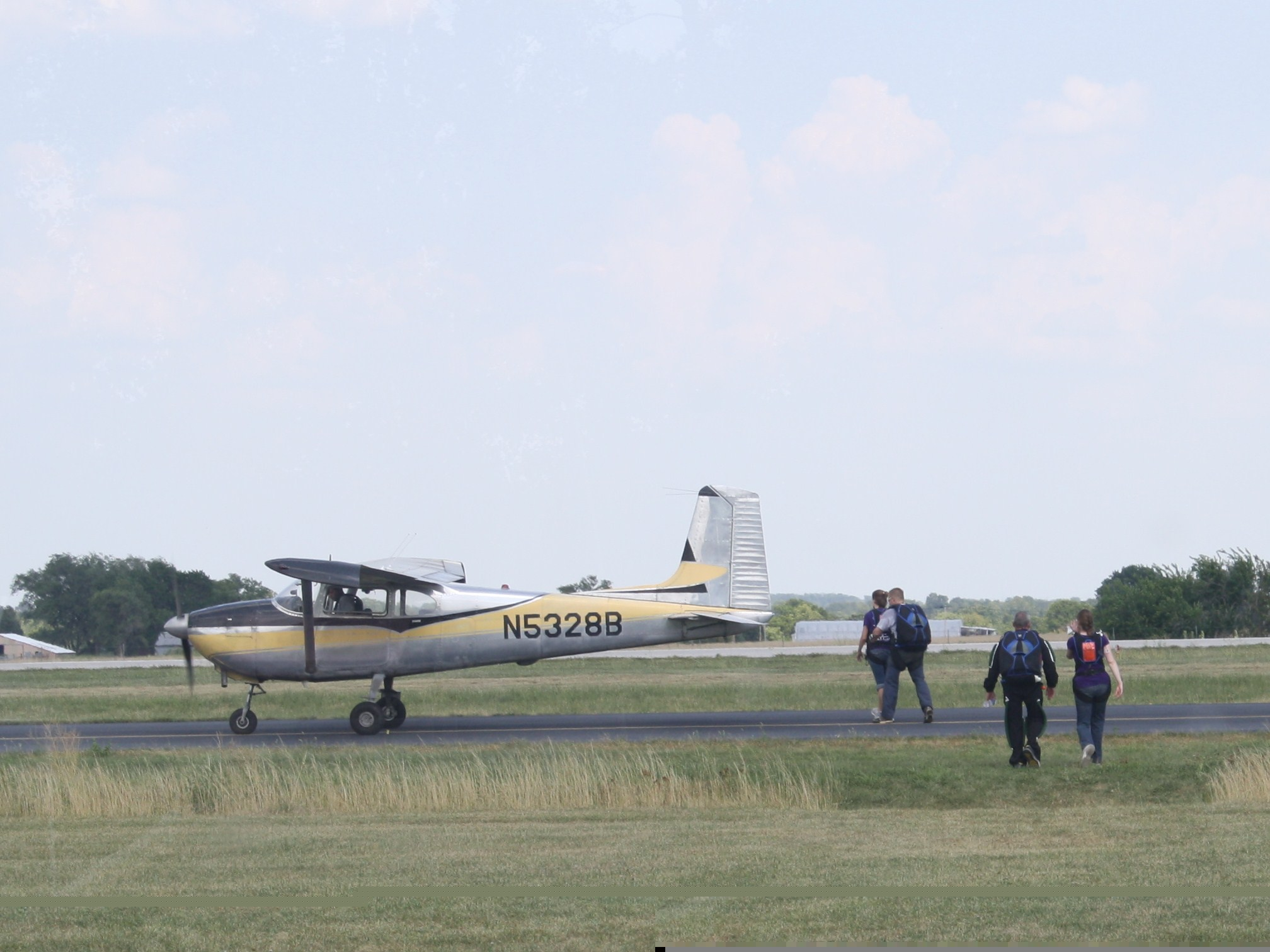 My instructor saw her and turned back to me, gesturing with his head. Did I see her there? I grinned and nodded. Yes, I saw.

Now he gestured at his co-instructor, tapped on the pilot’s arm, and enlisted the help of the other men. “It’s her birthday!” He shouted, his voice a nearly indiscernible sound above the engine.

“You’ve got to help me,” he told the young pilot–and then launched into an off-key rendition of “Happy Birthday.”

Could Joanna hear us singing over the usual noise? Yes, she was blushing now as my instructor sang loudly: “Happy birthday, dear whatever-your-name-is” and we all sang together: “Happy Birthday to You!”

We sunk back into our silence. The flight seemed much longer than I’d expected. But we were finally reaching altitude.

The pilot’s hand touched my shoulder and I thought for sure I’d done the forbidden–messed with his controls somehow. I scrunched further into the corner–but when I looked up, I saw that he was looking at me.

“Wanna steer?” he mouthed, gesturing back and forth with his hands in a steering motion.

I looked at him askance. “Are you serious?”

“Sure, It’s nothin’.” He jogged the yoke towards me and we turned accordingly.

I was facing backwards on the floor. I couldn’t see. There was no way I could steer the aircraft. Even if it was “nothin’.” I was more than a little terrified. What was going on here?

I shook my head no and turned aside. Why I was I afraid to take his daring offer? I’d always wanted to fly.

Later, I learned that he was in his late 20s and that he listened to Moody Bible Radio.

I could have just missed an opportunity.