How many times have people commented on what they see as the impossibility of our life? Difficult deliveries. Lots of young children, one right after the other. Foster care thrown on top.

How many times have I responded back that God gives grace for what he gives? I didn’t have the grace (or the skills) for three when I only had two – but God gave the grace when he gave the third child. Ditto four. And five. (Even if the skills are still a work in progress, to be honest!)

Nothing makes this more clear than when a foster child moves from our home.

Sweet P lived with us for 20 months and was reunited with her biological family in November of last year. We were so excited (still are!) to be able to participate in a successful reintegration. Of course, it was bittersweet – as happy as we are for her and her family, we are also sad to no longer have the connection we once had (We are so thankful that we have a good relationship with Sweet P’s family and have been able to see her a few times since reintegration, most recently an overnight just last night.)

Anyway, having a foster child move is bittersweet, but there’s another feeling I wasn’t quite prepared for when we started fostering. It was a feeling of… ease. Like, “wow, it’s a lot easier to parent four than five.”

The strange thing is, it wasn’t that easy to parent four back before four became five. My capacity expanded somewhere along the way. God gave grace for what he gave – grace for five.

But it’s time for expansion again.

Not a foster child this time. We’re not sure when Daniel will be done traveling and the logistics of a new placement don’t work very well with our current situation (lots of appointments that need to be done rapidly don’t work very well when you have four other children that you can’t take with you – thanks COVID! – and a husband that may or may not be out-of-state at any time in the near future). So we won’t be taking new foster children until we have a more settled schedule.

But four has become five again – it’s time to stop popping bon-bons (ha!) Instead, we are preparing to expand again as God gives grace for a new little one arriving on the outside sometime in September.

Beth-Ellen came to me, complaining that her shoes didn’t fit. Would I help her put them on?

Oddly, she seemed to be right. I could have sworn those shoes fit yesterday. But wait…

I peeled back her sock just to make sure I wasn’t missing something.

Yep. Three pairs of socks worn on top of each other.

But three pairs of socks is barely scratching the surface of this girl’s love of layers. She’s worn as many as six or seven pair at a time. She’s also been known to layer three shirts and stick a dress on top of it all.

She’s a character, our Beth-Ellen girl.

And we love her.

Ursula K. Le Guin’s Catwings Return is 48 pages long, has illustrations on nearly every page, and just happens to be due back to the library tomorrow with no more renewals available (which means I’ve had it on my bookshelf for 12 weeks already – nothing like a due date to inspire action.)

One fewer word missed on the verse I’m memorizing. The times when my children look me in the eye when I call their name instead of just ignoring me. A couple square feet of counterspace cleared of dishes and wiped clean of crumbs.

May 2021 be a year of many tiny steps in a good direction.

One of my favorite parts of this particular stage of mothering is that I can do all sorts of crafts without any expectation of them having to look truly good.

We gathered leaves and made leaf prints today. The ones we made with our temperas and kiddy paintbrushes are nowhere near as pretty as the one on Pinterest, made with expensive paint markers and made by an actual adult. But the children learned a little about the process of printmaking, and this actual adult got to do leaf prints without stressing over how my product was, mmm, less-than-amazing.

And when I finished making my prints and thought the painted leaves looked pretty? I quick cut out a cardboard ring and glued the leaves onto it to make a funky fall wreath. As a single gal, I couldn’t have pulled off such a kitschy craft – but nobody bats an eye when they see such things in the home of a mother of preschoolers.

Just don’t tell anyone that the preschoolers didn’t make it – it was all me :-)

I asked her what she wanted for her birthday meal. She said she wanted tacos.

“With taco meat or salsa chicken?” I asked.

“And lettuce with ranch?”

So that’s what we had the day she turned six.

I asked her what color. She said she wanted gray. “Like a real bunny.”

I’ve lost my cake decorating stuff, including my gel dyes, so we compromised with brownish from half-toasted coconut.

And that’s what we had the day she turned six.

The audiobook currently on repeat in our house is E. Nesbit’s The Railway Children.

Can you guess the children’s names from this post-it I found in the living room?

Tirzah Mae and Louis are playing that they are Ella and Rally ‘Round Campbell. They are two of many siblings, all of whom have elaborate back stories.

Ella is carefully skirting the edges of rooms to make sure she’s socially distancing from those Garcia-folk, who are NOT in her household.

Louis (er, Rally ‘Round) is currently listing the order each child came out of the uterus.

I’m less than thrilled at the political mailers constantly inundating our home.

Shiloh, though, is eating them up.

Daniel has a lamp on his nightstand. He turns it on each night as we make our way to bed. We dress and read and, all too often, poke at our phones in the light of that little lamp.

I have two lamps on my nightstand. One is on a timer. It turns on at 0545 and off at 0730, its bright full-spectrum light intended to tell my body that it needn’t hibernate for winter. My other lamp is for finishing a chapter after Daniel goes to sleep, or putting the final touches on my plan for the next day. I use it rarely.

On nights like tonight, when Daniel is traveling for work, I turn on Daniel’s lamp when I come in to get ready for bed. I sit in bed and read or poke at my phone or finish up my plan for the next day. And then I reach over the empty space where my husband ought to lie and turn off his lamp. My lamps remain unused.

Life is so very normal and so very abnormal when he is gone.

What’s the most popular starting letter for American state names?

One could ask the internet. 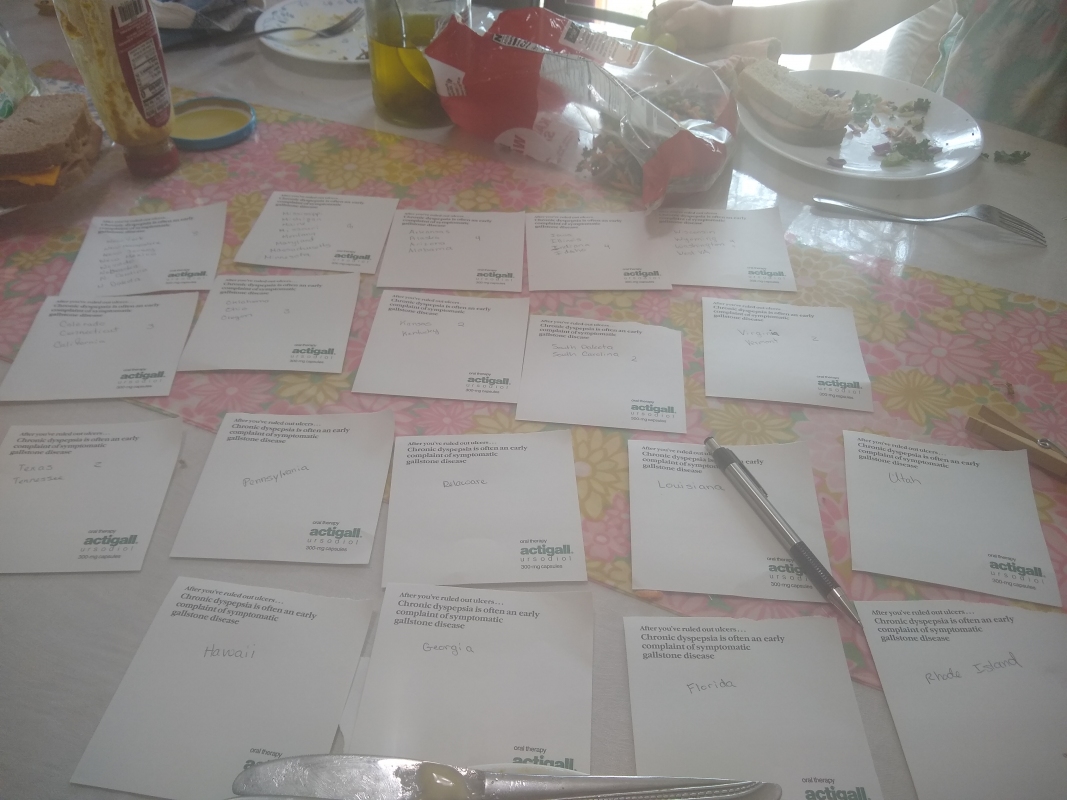 Or one could grab an atlas or similar list of state names.

Or one could write down the names of all 50 states from memory, recording each first letter on a different piece of scratch paper before counting them up and organizing them most popular to least.

I’m sure you couldn’t guess which one we did.