Or so the song goes.

Except our Johnny won’t be marching home again for quite a while.

Today, as this posts, my brother John is on his way to Omaha. From there, he will fly to San Diego, where he will be trained as a United States Marine. 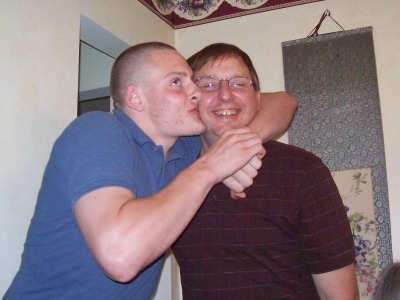 He’s the first of our family to leave Nebraska. The first (of the immediate family) to join the military. The first to miss Christmas.

He’ll be gone for thirteen weeks at boot camp–and after that? No one knows.

It’ll be a big change for our family. Pray for us all, please.

And we will be praying for John.

Praying that he will grow in the strength and knowledge of Jesus Christ even as he’s trained in the strength and knowledge of the United States Marine Corps. Praying that he’ll fix his eyes on his Supreme Commander, Jesus Christ, and walk in step with HIM; even as he barks out “Yes, sir” to an earthly commander. Praying that even as he takes an oath of fealty to this country, to uphold its constitution, he will remain strong in a much higher oath–to do homage to the King above all kings, to faithfully serve Him, to die if necessary for His name and His glory.

And I pray that when Johnny comes marching home again, he’ll come marching not as a warrior of this world, but as a faithful warrior of Christ who can say

“I have fought the good fight, I have finished the race, I have kept the faith. Finally, there is laid up for me the crown of righteousness, which the Lord, the righteous Judge, will give to me on that Day, and not to me only but also to all who have loved His appearing.”
~2 Timothy 4:7-8

8 thoughts on “When Johnny comes marching…”