The state of Nebraska is littered with dozens of defunct towns. In the days of horses and wagons, they were living, breathing communities with a general store and a post office–maybe a school or a church.

Walnut, Nebraska, now little more than a memory and a decrepit building on my Uncle Richard’s property, is one such town. My great-Grandma Louise Cook was the postmistress for Walnut Grove Township and ran the general store, supplying the surrounding farms with news and goods.

Grandma Louise owned the general store with her husband Ben Marshall. Back then the store was across from my Uncle Dean’s house–that is, the house where his widow lives now. Ben and Louise were in the process of moving to a new store–the store that still stands today–when Ben Marshall died in the Spanish flu epidemic of 1918. Louise had a four-year-old son and a child on the way and the contents of the general store were mostly packed inside their new house–the home my Uncle Richard lives in now.

Louise held up admirably under the circumstances she had been given. She settled the new store, bore her son, Ben Jr, and cared for her older son, who was crippled by polio in the years after the death of his father. She was still a widow at the time of the 1920 census, with her occupation listed as “Salesmistress” of the “General Store.”

Some time later, Louise married my grandfather, Orval Anthony Cook. Orval was four years younger than she, and at the time of the 1920 Census, was listed as a laborer on the “home farm” owned by his parents.

Louise continued to run the store and be the Walnut Grove Postmistress throughout the Great Depression. The postmistress job was a good, steady income that enabled the family to weather the depression. The general store enabled many other families to weather the Depression. Often, families from the surrounding farms would purchase their groceries at the general store on credit they could not afford to repay. Grandpa Orval would go about to try to collect bills and often came home with an animal or two.

The Nebraska GenNet Project has a map of the Walnut Grove Township from the 1920 Atlas of Knox County. The northeast corner of the map is a snapshot into my family history. 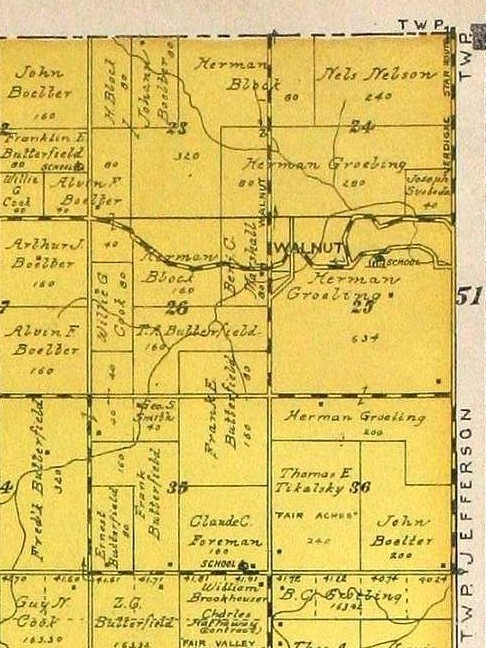 Benj C. Marshall, whose property sits near the center of the extract above, was my great-grandma Louise’s first husband. By the time this atlas was published, he was already deceased and Louise was running the General Store on their property by herself. Her property was bounded on the west by the property belonging to her father, Herman Block.

By the southeast corner of Herman’s property, Orval Anthony Cook (who would marry Grandma Louise and become my great-grandfather) was working on the “home farm” belonging to his father Willie G. Cook. Frank E. Butterfield, who owned property sprinkled throughout the extract above, was Orval’s uncle.

The very corner property, which extends into Jefferson Township (and possibly into Washington Township as well), belonged to Nels Nelson. Nels’s granddaughter Carol would one day marry Louise and Orval’s son, my Grandpa Ronald.

Which brings me to today.

Walnut, Nebraska no longer exists as a town–but it still exists.

This is my mother-land, my home-place. While I never lived in Walnut, Nebraska, I still grew up there.

I grew up riding north over the “Big Crick”, turning west onto what was Benj C Marshall’s land. I waved to my Uncle Richard before driving past the old General Store.

While few, if any, will recognize the name “Walnut, Nebraska”, those that do think of it fondly.

Walnut is where my family is from.