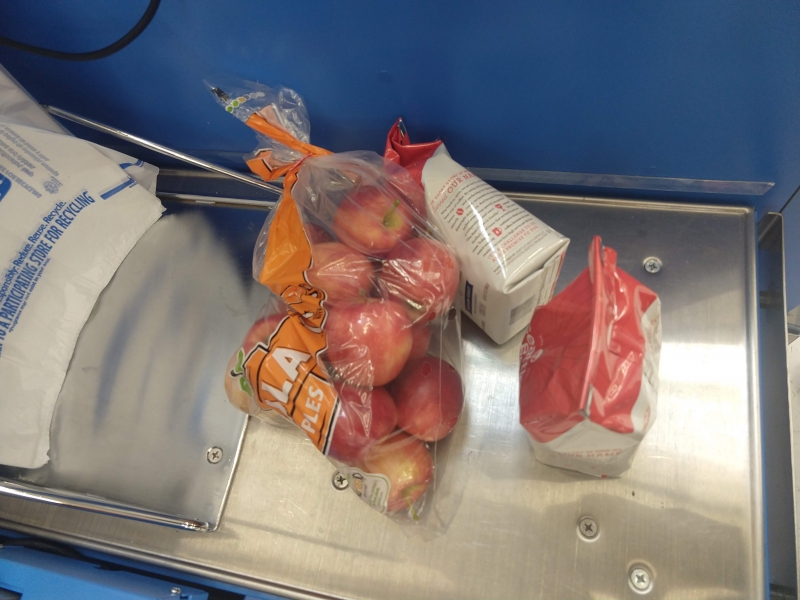 I needed apples for the apples’n’onions I had been promising the kids we could have with our pork (I really DO love that they want to do everything they read about!) so we dropped by Walmart after church to get some – and some extra coffee since we were on our way to out. We have since determined that we are not fans of Seattle’s Best – this particular one tastes burnt and overly acidic. 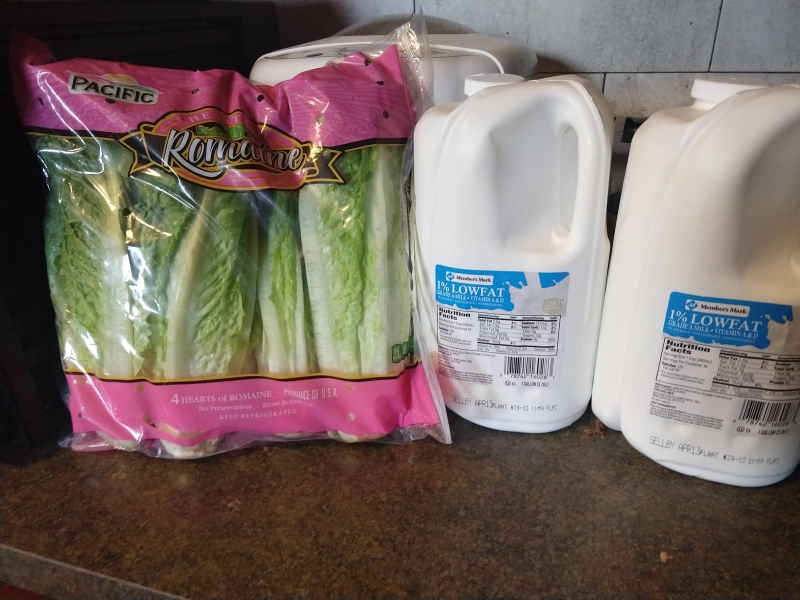 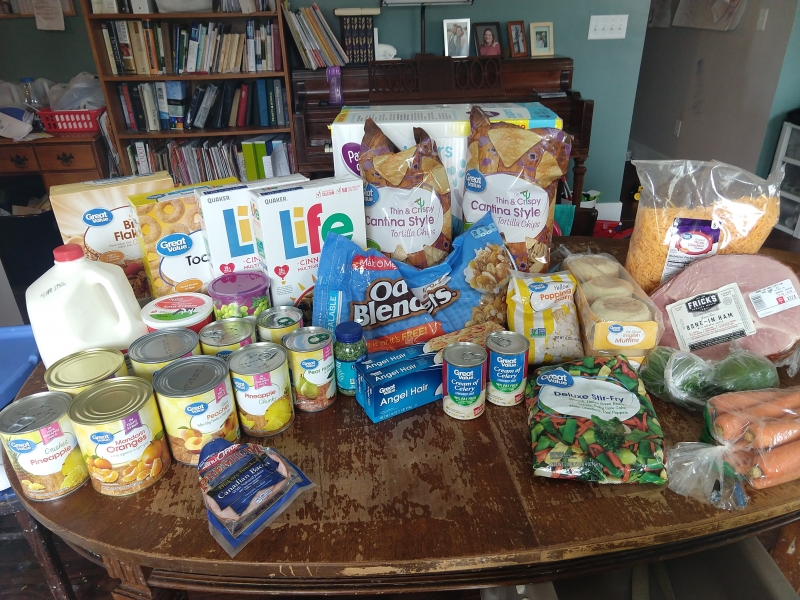 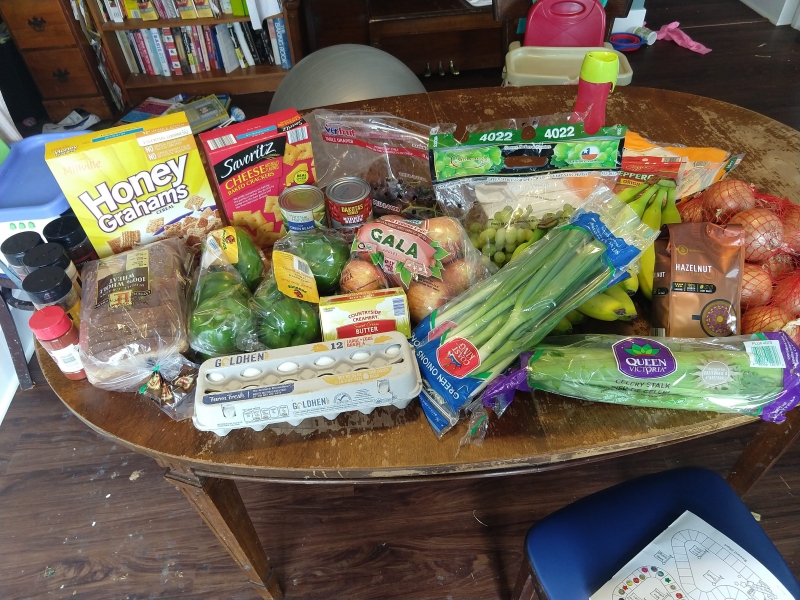 And this is where I realize I should explain something. My budget isn’t actually $115 per week. It’s $123 per week – except that I subtracted $8 per week to spread the quarter of beef I bought last fall out over the whole year. You see, one of the wonderful things about not living paycheck to paycheck is that I can stock up on things when they’re inexpensive. I can go way overbudget one week and then make it up in other weeks without decreasing food quality. In fact, we can actually eat better and afford more that way.

Which is why I bought almost 55 lbs of meat this week. 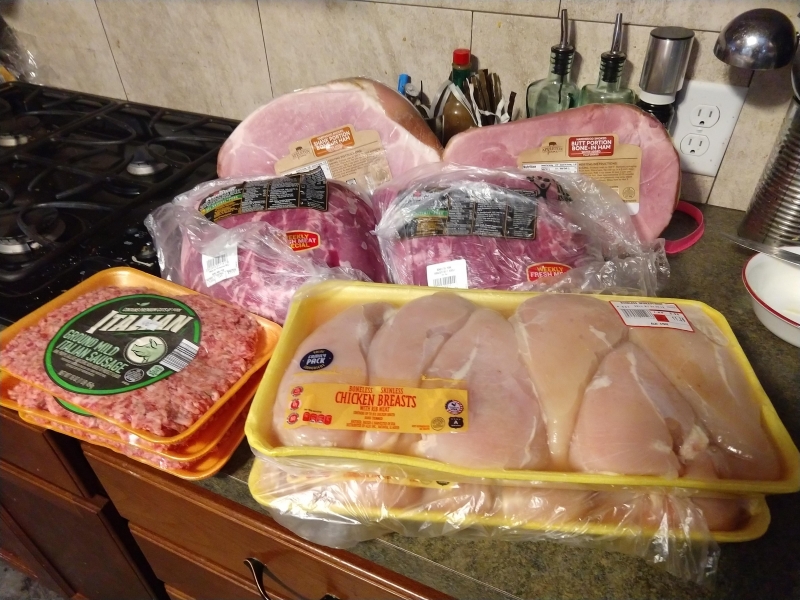 We just started a new menu cycle – one that includes ham and pork roasts once a month. ALDI sells a shank ham for $1.19/lb, nearly $0.40/lb cheaper than Walmart’s cheapest ham – but ALDI only has ham some of the time. In order to ensure that I can be eating the less expensive ham for the entirety of my spring cycle, I bought two hams today and stuck them in the deep freeze (I already have a ham for our first go-round in the fridge.) And those pork roasts? It just so happens that shoulder roasts were one of ALDIs fresh meat specials this week. I bought a couple (enough for the rest of this cycle) at $1.49/lb.

The family pack chicken breasts were another fresh meat special this week – $1.69/lb. I bought two family packs and plunked them in the crockpot as soon as I got home. As soon as they were cooked through, I cut enough up for Friday’s chicken salad, then shredded the rest with my hand mixer in the crockpot’s crock. Then I portioned the meat into containers and stuck them in the deep freeze too. I’ll pull them out and use them as needed – it’s likely they’ll get me through a couple of menu cycles.

The Italian sausage is for Great Grams’ spaghetti sauce, which I’ll be making next week. And, of course, I’ll be making a second batch to stick in the freezer for the second time through the menu cycle.

So, especially once I consider the beef that was already in the freezer from last fall’s quarter, I now have most of the meat I need for the next three months of meals – all of it (except the Italian sausage) at less than $2 per pound, some significantly less. I spent a lot this week and went way overbudget – but ultimately, this allows me to stay within my budget all around.

I realize that not everyone has this luxury; but for those who do have wiggle room, I think this strategy of intentionally overshooting your budget when you can get meat on sale is a good one. You just have to remember to adjust your weekly budget down from then on out to keep from just staying in a deficit.

In this case, I spent $79 on meat. I’m going to spread that over the next 12 weeks (which is how long I expect the meat to last before I have to buy more). So I’m going to decrease my weekly budget by $7 per week, making it $108 per week.

We bought more coffee because we really did NOT like the Seattle’s Best stuff. We really, really need to make sure we buy enough coffee at the Spice Merchant next week!

Unfortunately, Daniel made this purchase and I don’t have the receipt for it (and it hasn’t posted to our account yet) – so I think I’ll just count it towards next week’s budget.

That’s $156.79, which is $48.79 over my newly jiggered budget of $108 per week. Ouch! I’m going to have to tighten the belt – but that should be easier to do (fingers crossed) now that I’m heading back to ALDI (cheaper prices on several things and less food waste from poorly picked produce at Walmart) and since I shouldn’t have to buy much meat.

Saturday, March 30
Breakfast – Daniel bought us donuts to go with the eggs he made us. And we had fruit.

Supper – Dumplings and Kraut and Bratwursts (I think.)

Supper – Quickpea Curry (made with this recipe from Taste of Home except that Daniel doesn’t like chickpeas, so we use cannelini beans. And I added some shredded chicken because we’re meat eaters. And I didn’t have enough curry powder the first time we made it so we use 1 Tbsp of yellow curry paste and just 2 tsp of curry powder instead of the called for 1 Tbsp of curry powder. And we serve it on quinoa instead of couscous. So, you know, basically the same thing all :-) 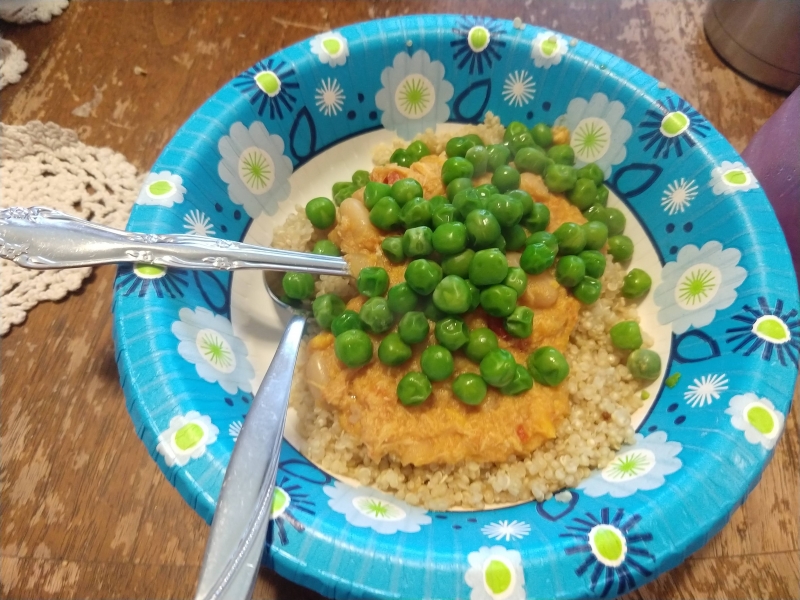 Monday, April 1
Pork roast, apples’n’onions (from Farmer Boy, but which I burned horribly), and coleslaw 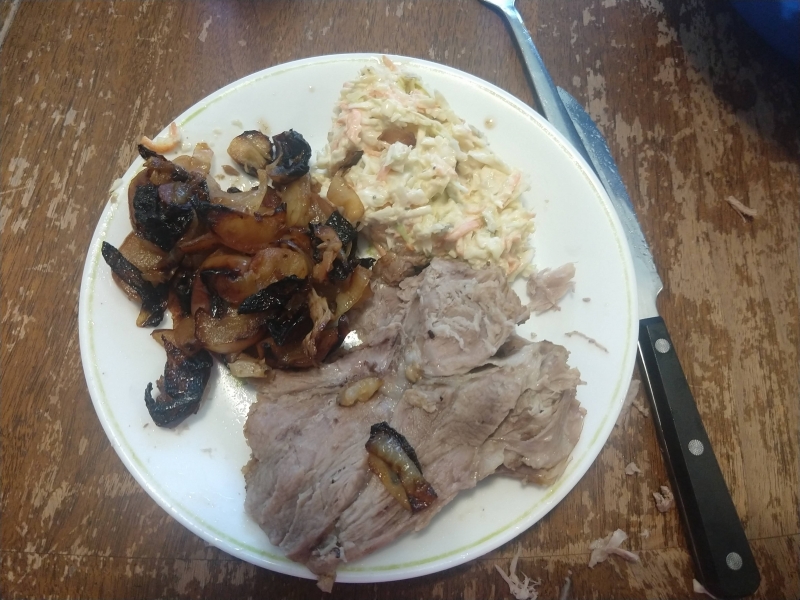 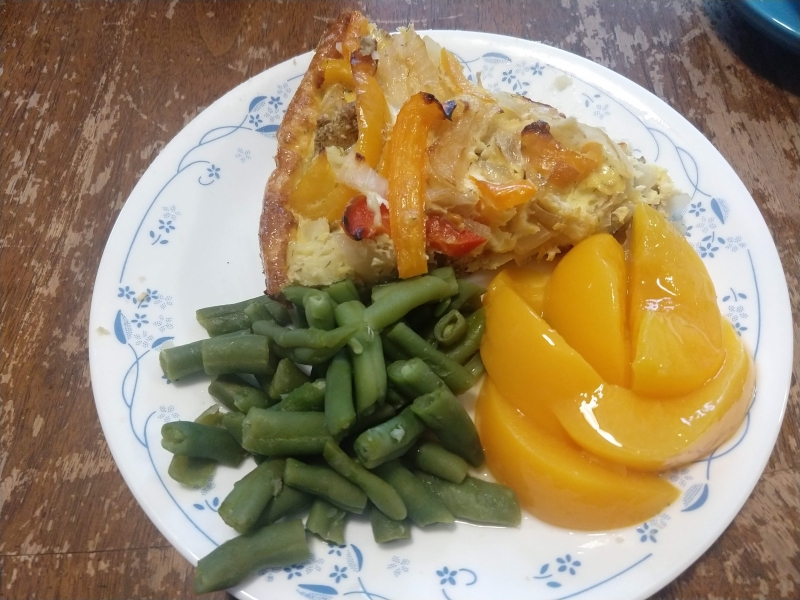 Wednesday, April 3
Oven beef fajitas (made using the older version of this recipe by Budget Bytes except with beef instead of chicken), lettuce salad, and burrito beans 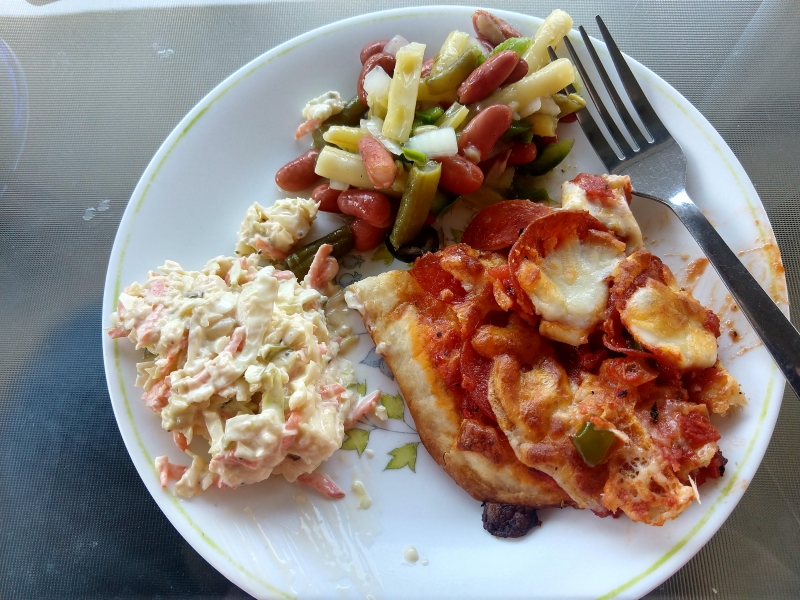 Friday, April 5
Chicken salad on lettuce with sliced oranges (I used this Dijon Chicken Salad recipe from Taste of Home. It was good but a bit bland.) 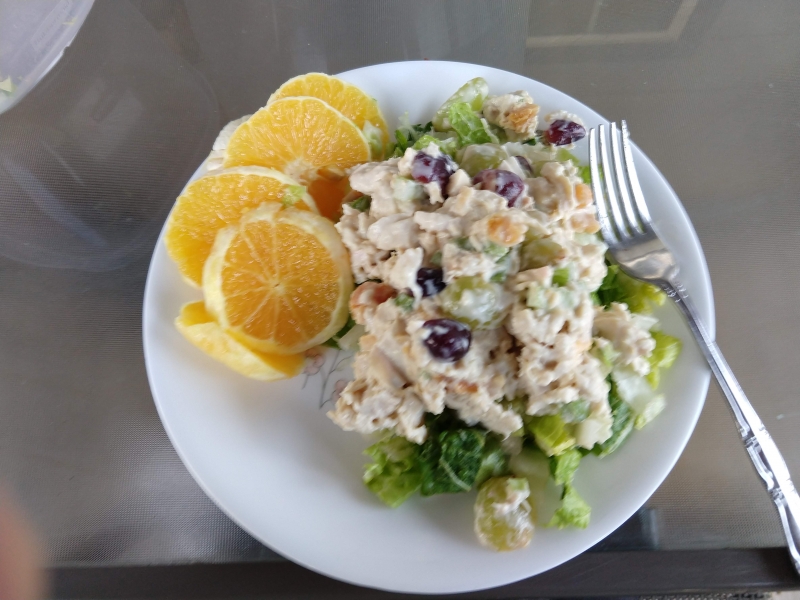