Yesterday, I attended the morning worship service at the little country church my mother grew up in.

A cousin hands us the program before we file in to the back row, where a shortened pew leaves room for Grandpa’s wheelchair. We open our programs and find the hymns in the hymnal. An older parishioner realizes that the hymn board still lists last week’s hymns. He corrects the board as I idly wonder why Virginia has not yet taken her place at the organ.

My cousin and another man act as the accolytes, and we wait for the pastor to appear. When the vacancy pastor emerges from the back room, my unasked question receives an answer. Virginia is gone, so we’ll be singing with a CD recording.

We sit for the opening hymn and the pastor cues up the CD player with a little remote. As strains of an organ diffuse through the building, I sing unfamiliar words to a familiar tune, played with unfamiliarly correct timing. The timing throws off more than just I and we lose ourselves a couple of times.

Nonetheless, the service flows smoothly enough. The new hymnal throws me off a few times. You’d think that I’d be more flexible than I am. After all, I only worship with a liturgy when I’m here at St. Paul Venus. I am only familiar enough with the liturgy to be distressed when something changes–it throws me off when the words I’m reading don’t jibe with the words my head thinks they should be speaking. It’s the little things that throw me off–a “You” where I remember a “Thee”.

When the service ends, we make our way to the narthex. The men open both doors to get Grandpa’s wheelchair through, then circle at the bottom of the steps to discuss whatever they do. We women bunch up in the narthex, exchanging greetings. One woman says she remembers my older sister from Bible study, but Grandma’s pretty sure she’s actually remembering me. I vaguely remember being rather talkative at an after-church Bible study during one visit.

I remember us kids swinging on the rail along the front steps. We’d play on the green indoor-outdoor carpeting until one of the ladies told us they had Sunday school ready for us. So we trooped down to the basement for Sunday school. At first, there were other kids; but by my later elementary years, we were the only kids in Sunday school. Whoever was in charge of Sunday school had something ready in case some kids showed up, but children were few and far between. I no longer fill the “kid” category–and Marlene and Richard were celebrating their 50th wedding anniversary with donuts in the basement–so there wasn’t any Sunday school following our service.

It’s a wonder the St. Paul Venus congregation still exists. In a rural community where most of the parishioners are retirees–or would be if they could afford to retire–there’s hardly the money to support a pastor. In fact, it’s been years since St. Paul has been able to pay a pastor’s salary. A nearby parish shares its pastor for an hour and a half every Sunday morning. Tithes pay for heating and electricity.

I can’t help but feel melancholy as I think of this little church someday being forgotten. For when it is forgotten, so will a great deal of my history and my family’s history. St. Paul Venus features prominently in the stories of my past.

They were married in the very church where at least fifteen years prior Ronald Cook had decided he would like to marry Carol Pierce. They baptized each of their twelve children in this same church–and saw them confirmed there. At least two of their daughters were married at St. Paul, and a few grandchildren were baptized there as well. When Grandma and Grandpa’s progeny expanded to no longer fit within their home, they moved family gatherings to the church.

I remember playing games in the church basement before moving upstairs to sing hymns around the organ or Aunt Nellie’s electric piano. We all rifled through the hymnals, searching for our favorites, while the kids threw out suggestion after suggestion. There wasn’t a dry eye in our familial congregation when Grandpa asked for his favorites: “In the Garden” or “On Christ the Solid Rock I stand”.

I remember Grandpa standing up to tell his stories after dinner. He’d tell us the story of Grandma and him on the Sunday school bench, and the story of the man who encouraged him and Grandma to “Be fruitful and increase”. He’d tell of how proud he is of his sons-in-law–he feels that they take more after his father-in-law than him.

And I remember the slide show Aunt Martha put together for their wedding anniversary celebration one year. We were watching it in the church basement when a reproduction of a the postcard he sent Grandma from Korea came onto the screen. “Turn it over,” Grandpa yelled. Sure enough, the next slide showed the back of the card–Grandpa was coming home. I’m sure I wasn’t the only one crying. He made it back safely after his time on the front lines in Korea–back to his bride.

My memories of the little country church are only the beginning of the histories that building could tell. The photo albums I perused yesterday held few familiar faces–but I could recognize St. Paul Venus in the background, telling the stories of the generations before. 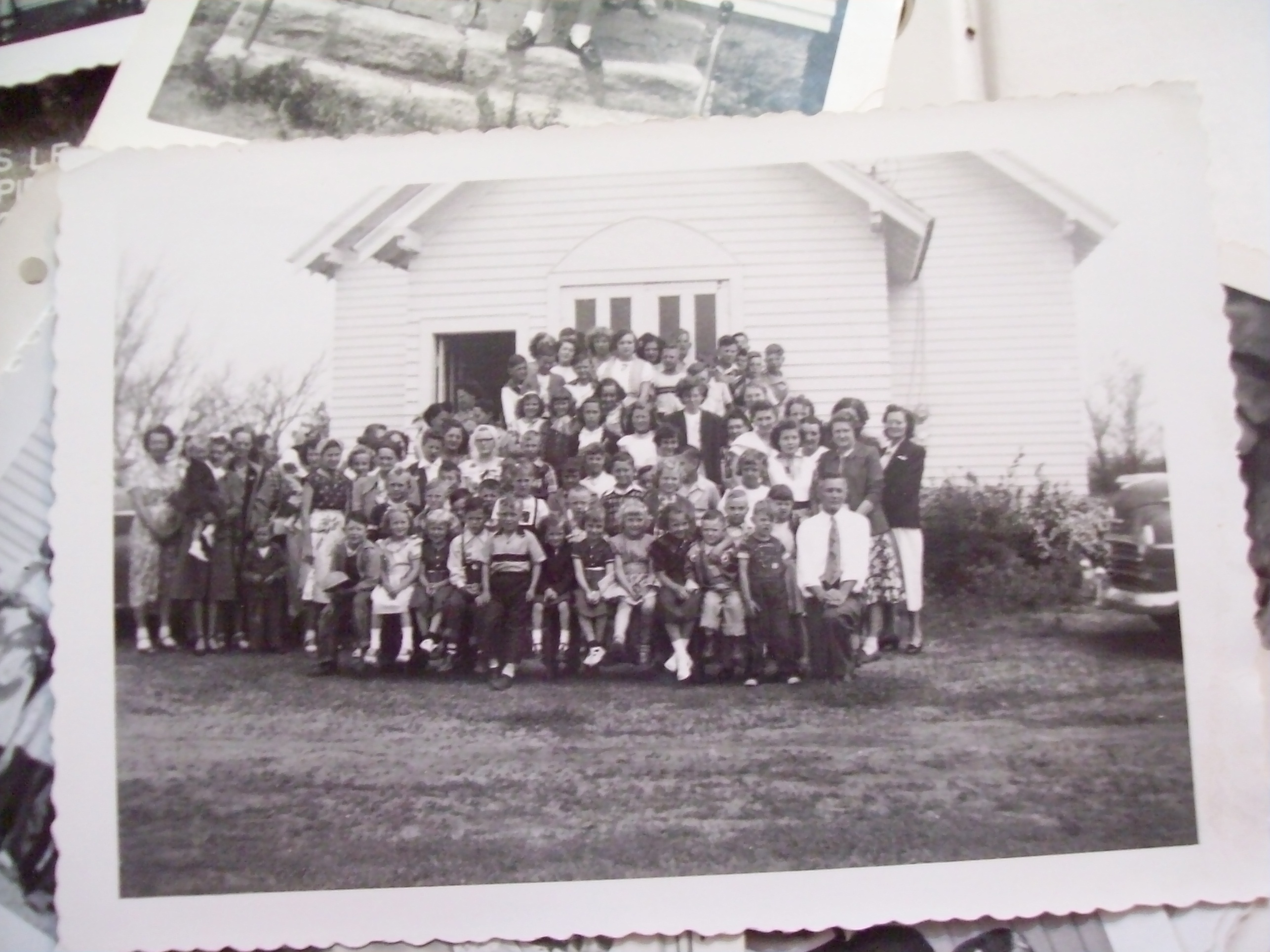 I can’t say when we started calling Grandma and Grandpa’s house “Wamma-Wampa’s”. I imagine it was someone’s early lisping first phrase–a corruption of “Gramma and Grampa’s”. But it caught on and now we rarely call it anything else.

In the past when we’ve visited Wamma-Wampa’s, it’s been at least a half dozen of us–if not throwing in several families together to make a couple dozen. Dozens is the way they come at Grandpa and Grandma’s house. They had a dozen children, and their dozen have been faithful to multiply.

Which is why today’s visit is so unusual. Me and Mom and Dad join Grandma and Grandpa and Aunt Ruth to make only a half dozen even. The three of us arrived less than half an hour ago, after the others were already in bed. Mom and Dad found the bedroom in the basement–and I was left to pick my room upstairs.

To pick. Imagine it. To have my choice of the three upstairs rooms (not including the landing). I didn’t have to determine whether it would be best if girls or boys stayed on the landing, who needed to be in the three-person room or the two-person room or the one-or-maybe-two-if-necessary room. I could just pick. I chose the three person room–the room I’m most familiar with.

At many a previous visit, I slept on the short twin bed by the door while Anna and Grace shared the full by the window. Now, I have set myself up on the full bed, just me. The window is open and I know my head will be congested by morning, but for now I don’t care. For now, I’m just enjoying the quiet that isn’t really quiet of the country.

No train whistles, no traffic, no car alarms, no domestic disputes. I can’t make out a single cricket, but the combined music of hundreds forms a pleasing lullaby, begging me to leave behind my city-folk worries and just be a child at Wamma-Wampa’s again.

Alas, in this too, this trip is different. I’m here on break, but not really. I have fifty papers with me to grade, four texts to peruse, and a sheaf of journal articles to review for my thesis proposal. This is a working holiday, and I’ve borrowed my sister’s laptop for the journey.

Which is yet another way that this trip is different. Instead of being unplugged, I’m more “wired” than I ever have been before. With wireless internet throughout the house–I can now blog whenever I please. But I also have to respond to students’ e-mails, input grades on blackboard, and maybe get some research in.

I’m already weighed down with the tasks I have for this weekeng; but I’m wishing, longing, hoping for something beside. I’m hoping that I can take a moment, just a brief breather, to enjoy some sort of holiday. I’m hoping to just once lose sight of all that must be done and spend some time just being.

As life grows busier, it becomes harder and harder to find that place. But if that place can be found, I’m pretty sure, I’ll find it at Wamma-Wampa’s.