Carrie has official sounded the closing bell for the L.M. Montgomery reading challenge–declaring that it’s time for everyone to link up.

The bell caught me by surprise, with plenty left unfinished.

Despite frantically reading a bit more this afternoon, I am still not through with Anne of Green Gables. 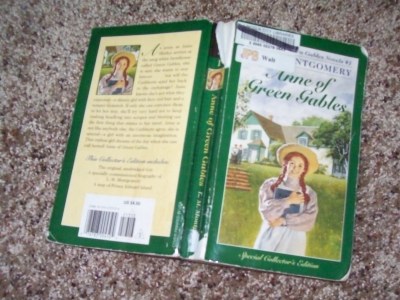 I did, however, read and review Much Ado about Anne by Heather Frederick Vogel. I also wrote some reflections on a quote from Anne of Green Gables.

But I did not complete the first piece of the project I had hoped to unveil at the end of this challenge.

A bit of background…

When I was young, the American girl dolls were all the rage (I guess they still are in some circles). In those days, the company that made them was called “Pleasant Company” and the only dolls you could get were the historical ones that had short chapter books that went along with them.

I got “Addy”, a young girl who escaped slavery via the Underground Railroad (chronicled, of course, in Meet Addy), when she first came out.

And I spent hours poring over the Pleasant Company catalog, with its outfits and accessories that matched the books.

I was simultaneously in love with Frances Hodgson Burnett’s A Little Princess. I adored how Sara Crew and her indulgent Papa went to pick out the doll “Emily” and outfit her in the very fanciest of clothing.

I dreamed of a wardrobe for my doll, a complete set–and one that matched a book.

But the Pleasant company outfits were much to expensive for my (or my parents’) budget, and I had little patience to do any quality sewing in those days.

So I made do with the clothes Addy came with–and the few garments Mom made for her.

But I still dreamed of a complete wardrobe, based on a book.

I grew up a bit and decided that I wanted it to be based on a REAL book–not books that were written in order to sell doll clothes.

It was perfect. Anne was the right sort of age, Montgomery goes into detail about her clothing and accessories, and I just happened to love the series.

I would make a complete wardrobe for Addy using the Anne series as a starting point.

And so I began to make lists of every object mentioned in the Anne series. The vivid chromo of Jesus blessing the children, the chocolate brown voile with its puffed sleeves and pintucked waist, the navy blue broadcloth jacket made by Marilla, the yellow pansy cut from a catalog that Ella May McPherson gave Anne to use to decorate her desk. I have a list of every object–and some only alluded to (the red and white triangles Anne had to work at before she could go out to visit with Dianna–what might that quilt have looked like?)

I started collecting bits and pieces of fabric that might be suitable for the project.

And, this month, I started sewing.

My first project has been a dress to approximate the dresses Marilla made for Anne to replace the dreadfully skimpy wincey:

Anne was standing in the gable room, looking solemnly at three new dresses spread out on the bed. One was of snuffy colored gingham which Marilla had been tempted to buy from a peddler the preceding summer because it looked so serviceable; one was of black-and-white checked sateen which she had picked up at a bargain counter in the winter; and one was a stiff print of an ugly blue shade which she had purchased that week at the Carmody store.

She had made them up herself, and they were all made alike–plain skirts fulled tightly to plain waists, with sleeves as plain as waist and skirt and tight as sleeves could be.

“I’ll imagine that I like them,” said Anne soberly.

Perhaps it’s a bit of a depressing place to start, but that is where I have started.

And this is what I have so far. 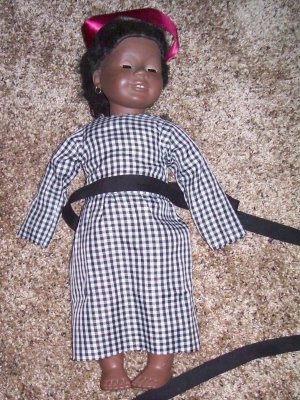 Nothing exciting, but it’s a start to this project I’ve been dreaming of for nigh on 15 years.